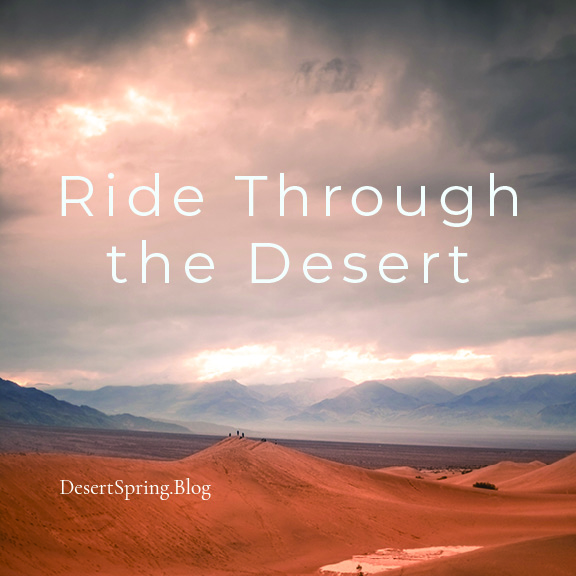 “Sing to God; make music to praise His Name.

Make a highway for Him to ride through the deserts.

The Lord is his name. Celebrate in his presence.

The God who is in his holy dwelling place

and the defender of widows.”

A camel race in the desert!   I was in the Saharawi camps (Sahara Desert) when there was an actual, competitive camel race . . . something that I will never forget.  The camels, decorated with traditional saddles, brightly colored fabrics, leather reins and tassels, were a stark contrast to the endless beige landscape of sands, blazing sun and clear blue skies.  The camel riders wore flowing white robes and black head-dresses, covering everything but their eyes.  I had not realized what was about to happen as I stood with a large gathering of people all around me.

Then I heard a sound I’d never heard before.  The desert floor began to tremble and the crowd began to cheer.  All the women raised their voices in their ancient, spine-tingling sound of celebration,  exploding in high, piercing tones of excitement and joy.  I felt as if I’d stepped into the old “Lawrence of Arabia” movie!

The ground shook.  The sands created clouds of dust around the thundering camels with their colorful, intense riders shouting them on.  Goose-bumps instantly covered my whole body as I stood in absolute awe and wonder  of those powerful beasts thundered to the finish line.  The great burden-bearers were doing what they were created for….perfectly suited….to be able to withstand the intense heat of the blazing sun, their feet fitted to engage with the sand and push themselves forward with tremendous power and thunderous speed.  The thrill of the drama mixed with the awe of these powerful animals left me breathless.

The writer of this Psalm passage knew what it was like to experience the power of the desert beasts who were created to move through the ever shifting sands.  The desert Psalms (Songs)  have a role to play as God’s Spirit moves through that dry land.  Some of our earliest experiences in the desert refugee camps centered around listening to worship music during the long, unbearably hot afternoons.  The music carried words of Love from the Heart of God to that dry, thirsty land, and began to open a Road in the desert.  Built by the Spirit of Jesus,  the Road led to the Father of the fatherless….the Defender of widows, left alone by war to raise their fatherless, vulnerable children,  desperately longing for the Father-heart of God to come near.

2 Replies to “Ride Through the Desert”