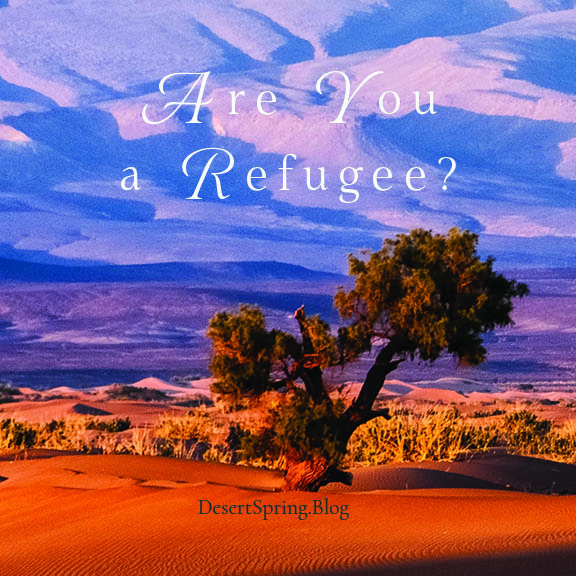 The promise of the Lord has proven to be true.

He is a shield to all those who take refuge in him.”

We hear much about the plight of refugees in our world.  We see pictures, hear statistics, and may even try to help in some way.  But for most of us, the experience of being violently forced out of our home with only what we can carry is far, far away from our personal reality.

When I first visited the desert refugee camps of my Saharawi people, I would ask to hear their memories of being driven from their homes.  They described their shock, their panic to run from the military violence, their terror for family members who were not with them. They described their desperation of running for their lives but not knowing where to go except for the deadly desert that bordered their homeland.  Bombs, gunfire, deadly chemicals were being unleashed on them as they ran. The memories were old, but the tears flowed as if it had happened yesterday.

The “way” of this world is filled with trauma and tragedy. It has been so since its beginning.

What a dramatic contrast from “God’s way” . . . perfection.  He has given this world such promise!  Such hope!

The writer of this Psalm had experienced God Himself being his “Shield” and “Refuge.”   God Himself is the Shield, that piece of armor that covers and protects our heart and head from the deadly attacks that target us.  When we run to Him, our Refuge, we find safety.  But a Refuge can only become that safe place when we step inside.  There is no “refuge” if we stand outside and look at it, or lean against it, or point it out to our Enemy.  We need to enterour Refuge, and stay there.  On His terms, not ours.

These are words of war . . . of battle . . . of  a choice as to which side you are on.  There are no by-standers in a war.  We have the incredible advantage of knowing Who will Win the War that rages over us.  But as the battles rage, God offers us Protection as refugees who have run to Him . . . run for our lives.  It’s not a game.  It’s not a movie.  It’s not just a “good idea.”  It is war.

God’s perfect way, promised, proven and true, is offered to us if only we will run into His Refuge as He battles for our lives.